We at LycodonFX were very thrilled to enter the realm of creating mobile applications for nature and environmental conservation/awareness, this subject it self is very interesting to us!
Here we explain and showcase the making and process involved in the developing these amazing apps. 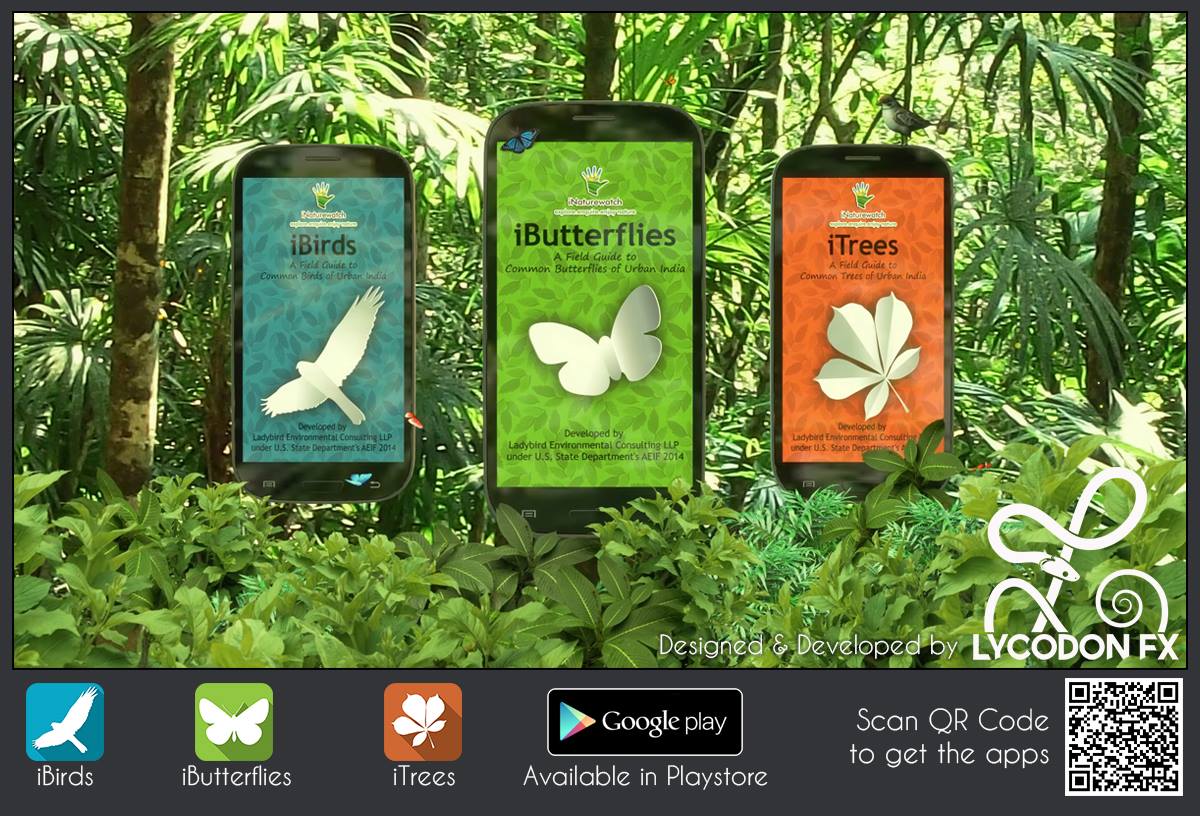 What is Mobile Apps for Climate Change?

This was a year long project which started in July 2014. The project is about development of mobile apps which could be used for climate change studies in urban ecosystems. Mobile apps could be an effective medium for students who prefer to learn through gadgets, thus mobile apps on common species has been developed for use of urban schools in 4 metros (Mumbai, New Delhi, Hyderabad and Kolkata). A citizen science programme under the title of “Urban iNaturewatch Challenge” has been launched based on these apps to collect data on climate impact on common birds, butterflies and trees. The project has 40 schools who have enrolled on this programme and we aim to develop 3000 student citizen scientists by March 2014. A master database on sightings of urban biodiversity along with inputs on occurrence and population of bird/butterfly species and flowering/fruit cycle among trees will be available online for climate change scientists across the country for their works. The work will be shared on UNEP’s Climate Change site.

Why trees, birds and butterflies only?

Climate change studies appear to be complicated, yet if looked at it closely climate scientists pick up tell tale signs from immediate environment i.e. the flora and fauna. It’s the delayed a flowering season of a particular species that disrupts the ecological cycle between the prey and predator e.g. if a plant completes its lifecycle before the moth caterpillar which feeds on its leaves, this disharmony becomes detrimental to the caterpillar’s survival which may not last enough to coincide with nesting of the insectivorous birds who might be feeding their young with the caterpillar. This disconnects snowballs into bigger problems large enough to affect human life. We therefore chose trees, birds and butterflies as our indicator species as they get immediately affected with slight changes in the weather. Moreover they are easily noticeable in a city surrounding than other elusive species such as amphibians, reptiles and mammals.

According to Cities Biodiversity Outlook, by 2050, an estimated 6.3 billion people will inhabit the world’s towns and cities — an increase of 3.5 billion from 2010. Our planet will have undergone the largest and fastest period of urban expansion in human history. The area directly transformed in the next four decades will be roughly the size of South Africa, and the new demands of cities will reshape most landscapes, both built and natural. Urban growth will have significant impacts on biodiversity, natural habitats and many ecosystem services that society relies on. The challenges of urbanization are profound, but so too are the opportunities. Cities can reconcile human society and biodiversity by creating environments that are ecologically sustainable, economically productive, socially just, politically participatory and culturally vibrant.

In order to meet up this global challenge, it is utmost important that cities value their urban green spaces and make people aware about their local biodiversity. People will only protect if they know what to protect. The Ladybird Environmental Consulting LLP provides a way out by developing mobile apps to document local birds, butterflies and trees in cities. These apps include 50 common species that are mostly found in metros specially Mumbai, New Delhi, Kolkata and Hyderabad.
iNaturewatch is a citizen science initiative of LEC which encourages urban citizens to appreciate and document their local biodiversity. This initiative includes events and resources which will be freely provided by LEC. The mobile apps are first product that is being launched under this initiative.

We came up with draft UI (user interface) sketches and this one was close to what we were expecting as a final product.

Paper sketches of Icons were then created digitally, the icons were designed to obviously depict its functionality.

After further improvisation and testing, the UI design layout and flow was finalized! 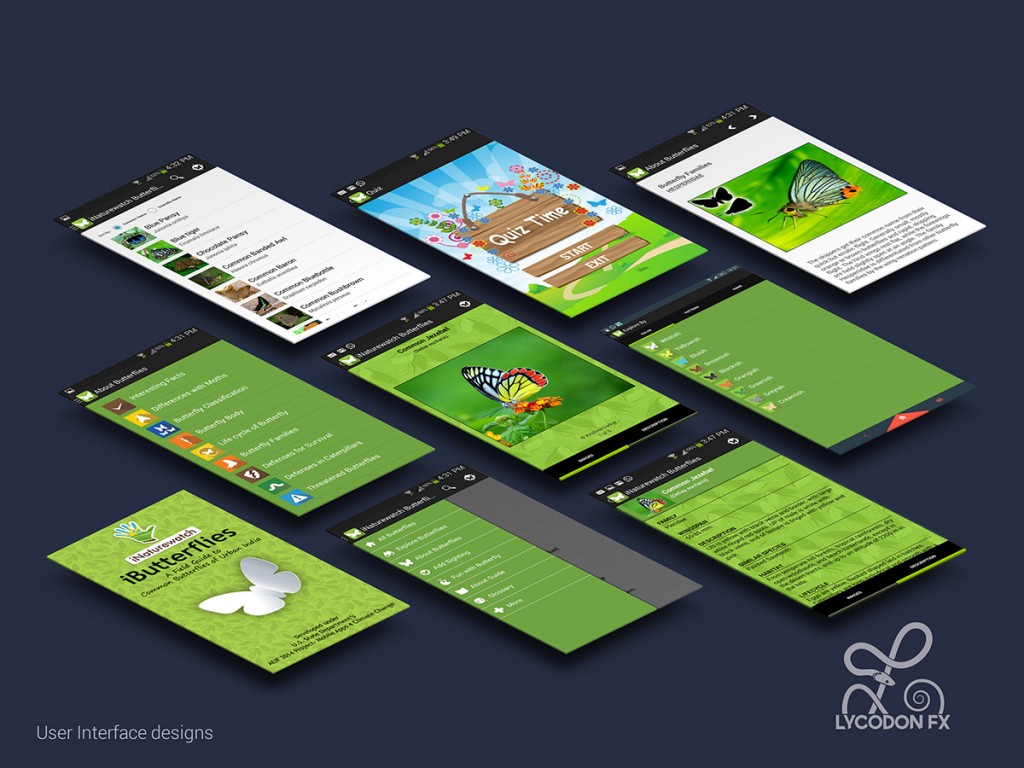 The data and images are optimized and integrated with further crossing device testing. 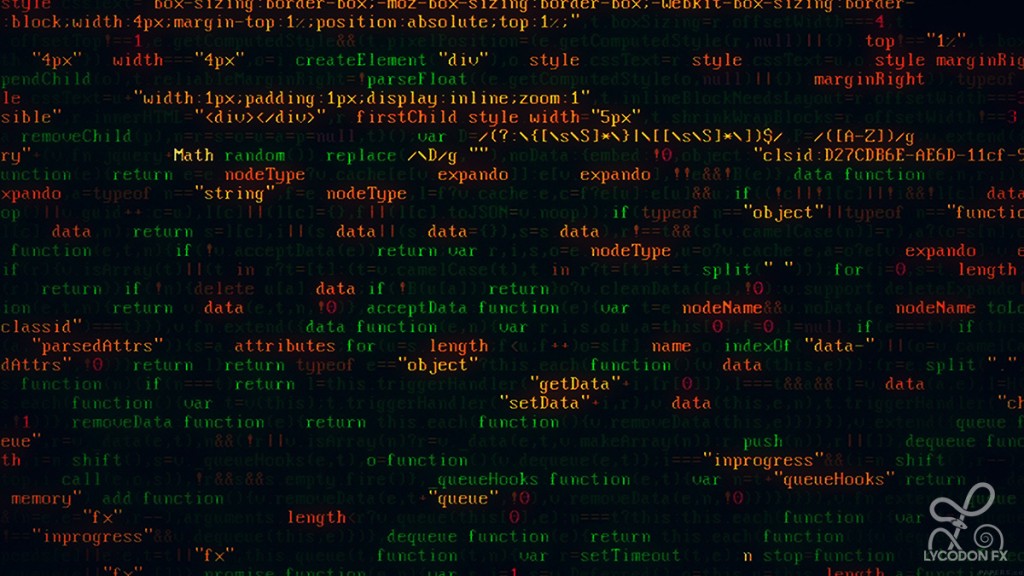 Keep calm and do the Coding…

The Phase of nonstop coding and coffee continues…and then….Voilà…the much awaited thrill starts shaping up! 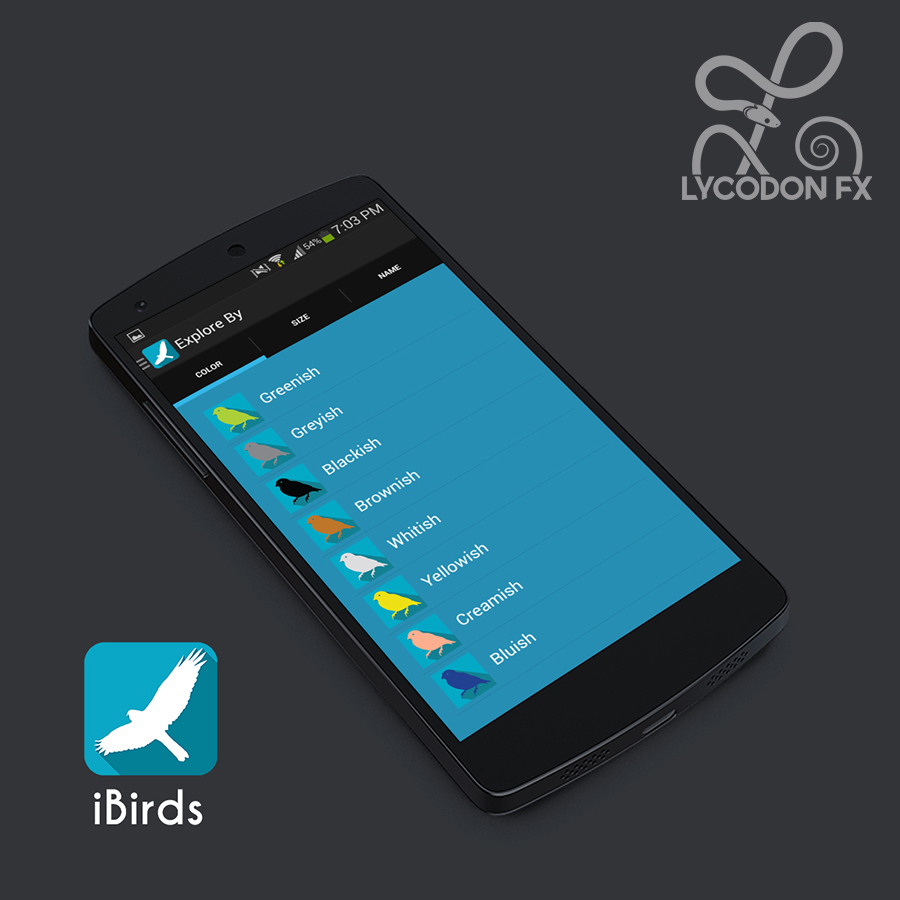 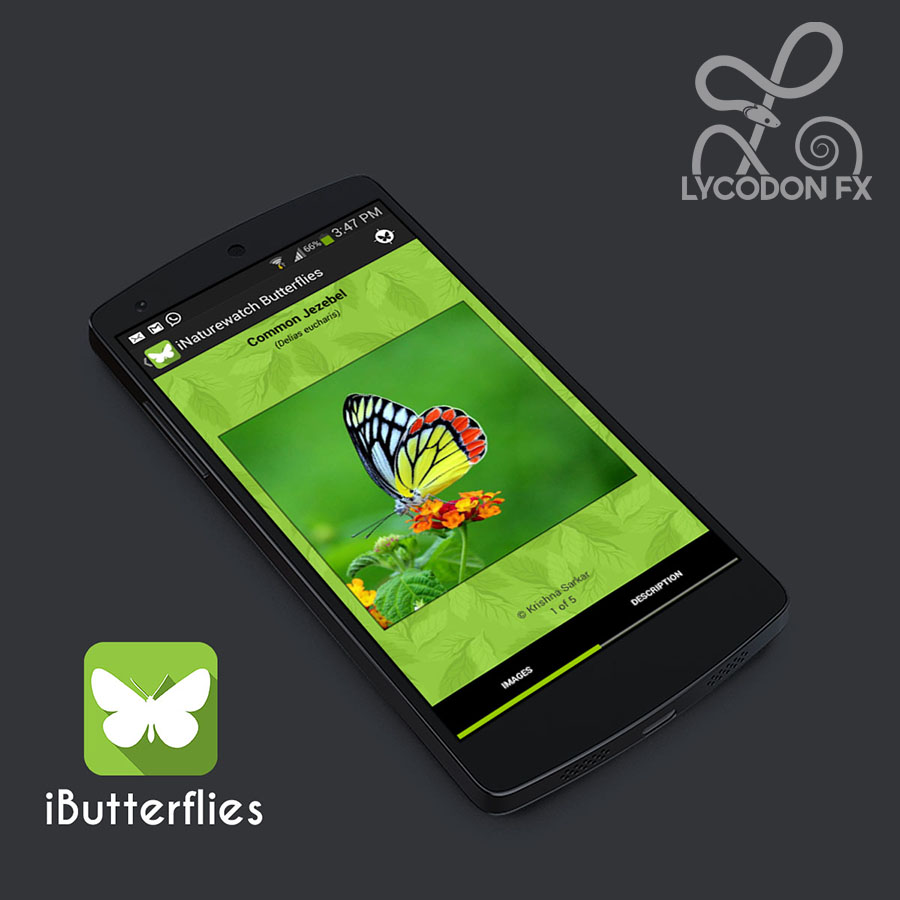 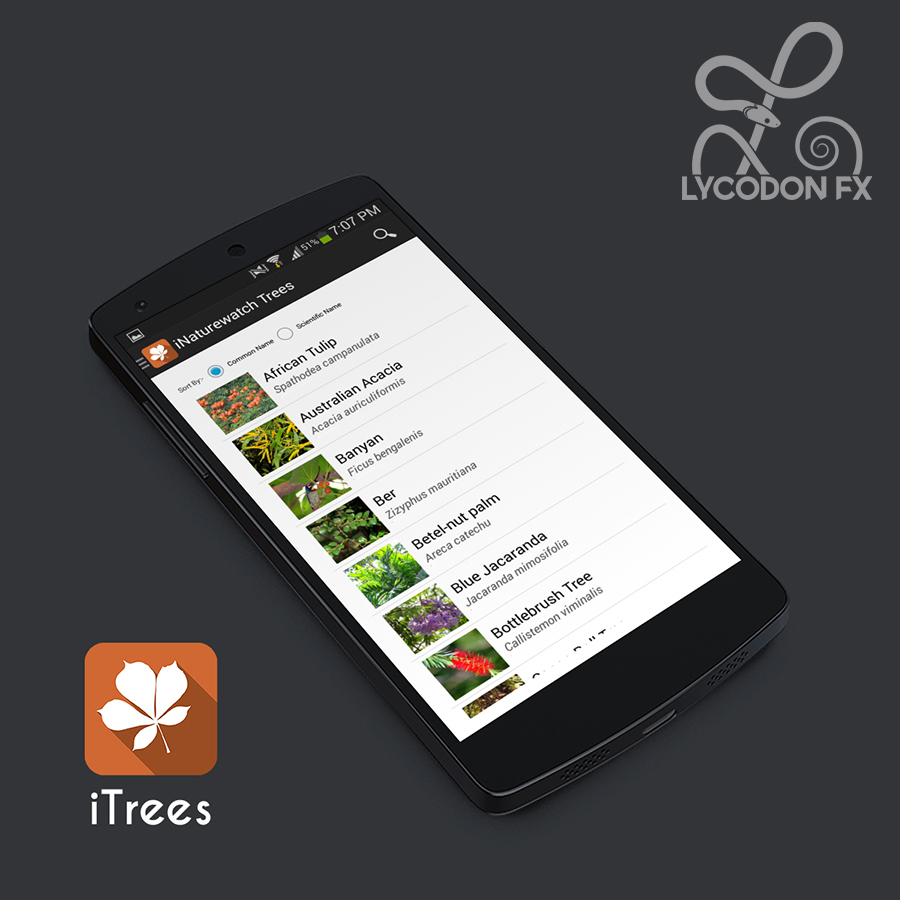 The iNaturewatch Urban Challenge Mobile Apps and was launched in Mumbai, Hyderabad, Kolkata and New Delhi.

In Mumbai it was launched on 8th December 2014 at Bianchi Hall of Don Bosco International School, Mumbai. Mr. Vikas Gupta, IFS, the Chief Conservator of Forest & Park Director of Sanjay Gandhi National Park was the Chief Guest of the event. Ms. Anamika Chakravorty, the Cultural Affairs Officer at the U.S. Consulate General, Mumbai was the Guest of Honour. The event was attended 237 students and 19 teachers from 15 schools along with several nature enthusiasts. 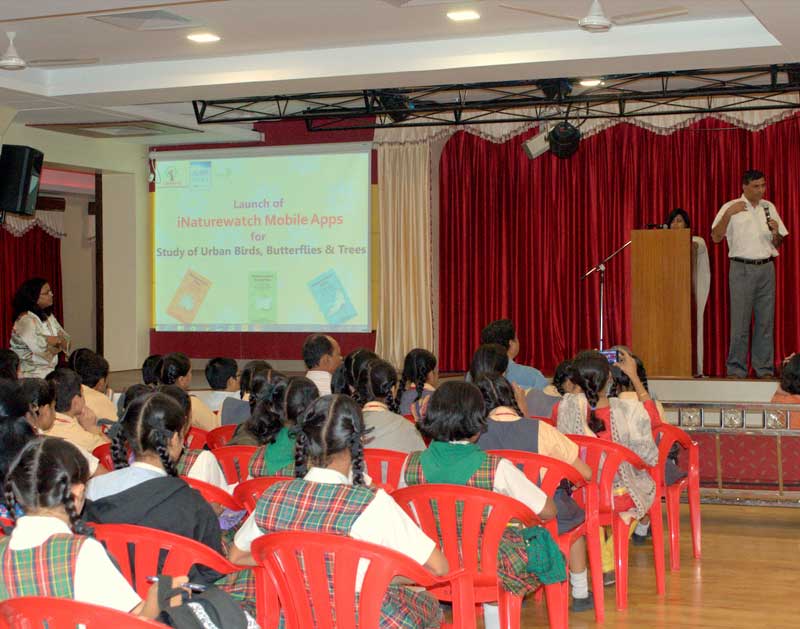 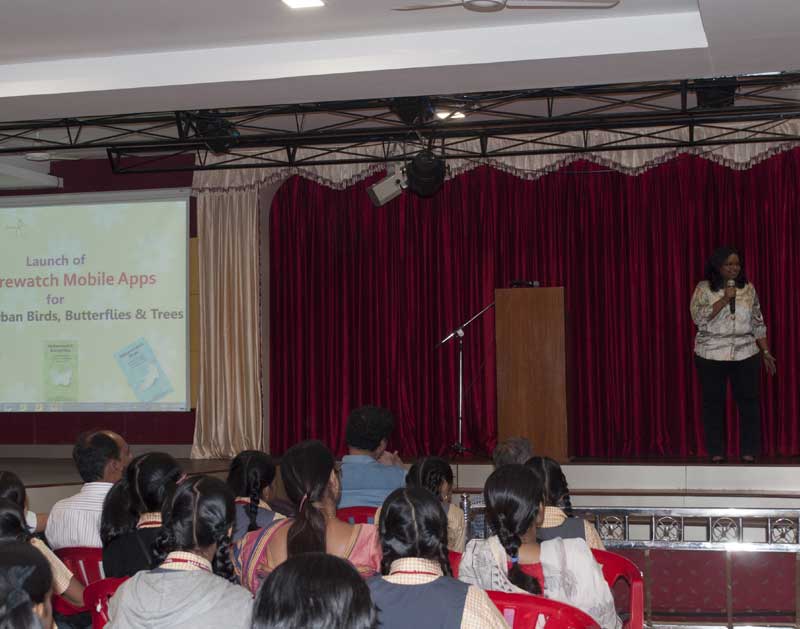 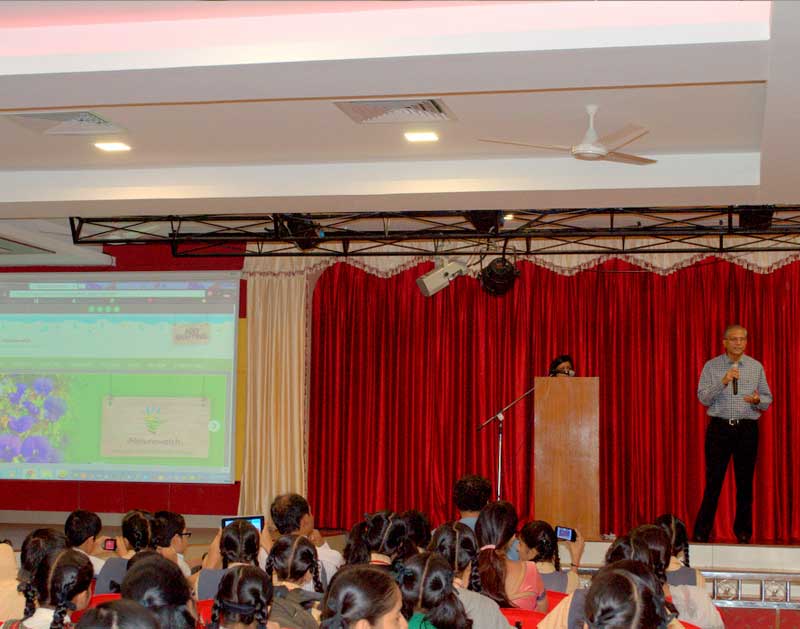 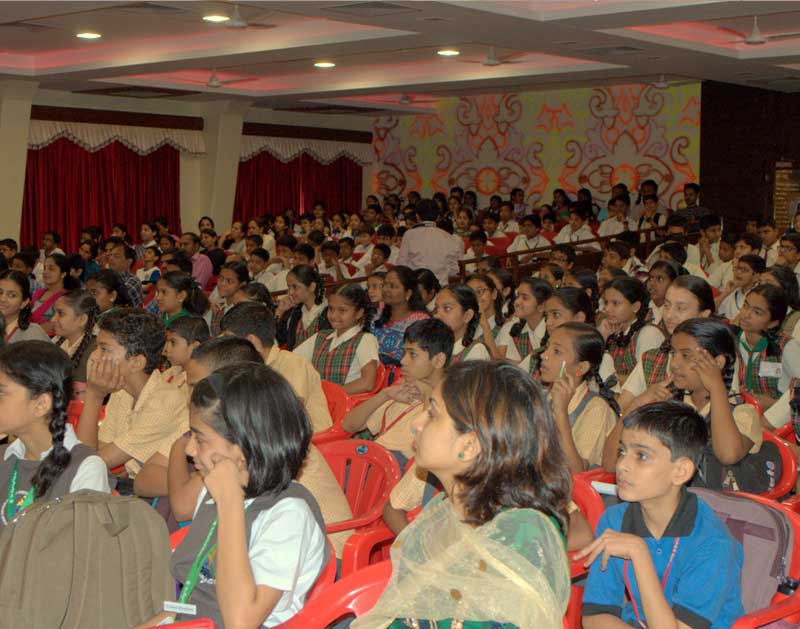 The launch event in Hyderabad was held on December 9th, 2014 from 10:00 am at the Patodia Auditorium, LV Prasad Eye Institute. Mr P K Sharma, Principle Chief Conservator of Forest (PCCF) and Chief Wildlife Warden, Telangana Forest Department was the chief guest for the event. Ms Vanitha Datla, Chairperson, Confederation of Indian Industries (CII) –Telangana was the special guest and guests of honour, Mr Anil Kumar V Epur, Chairman, WWF-India and Dr Taraprasad Das, Vice-Chairman of L V Prasad Eye Institute were also present during the event. We also had more than 100 teachers and students from nine schools of Hyderabad who were the main target group for this programme. 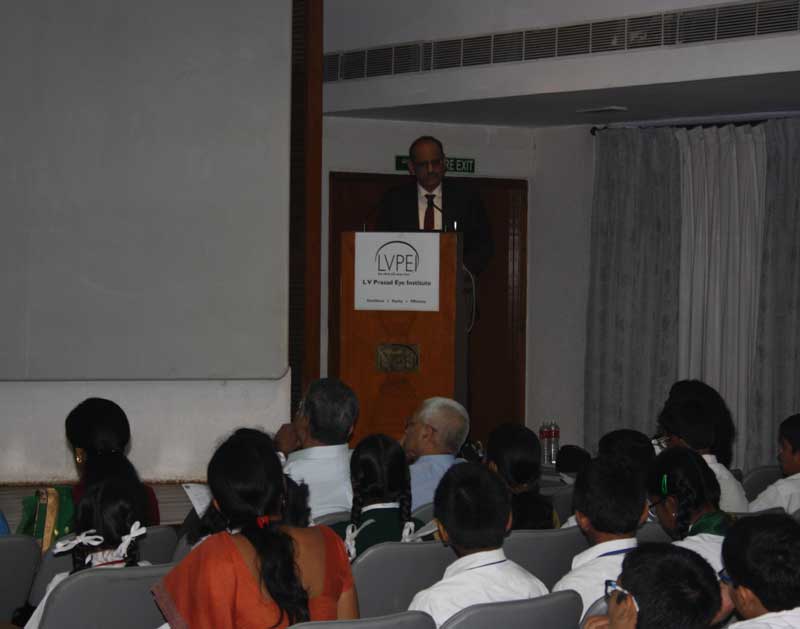 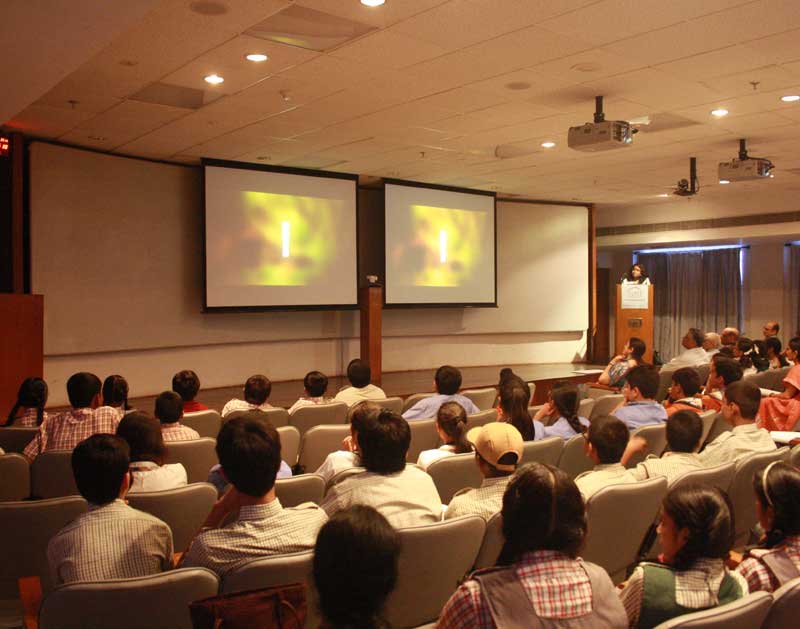 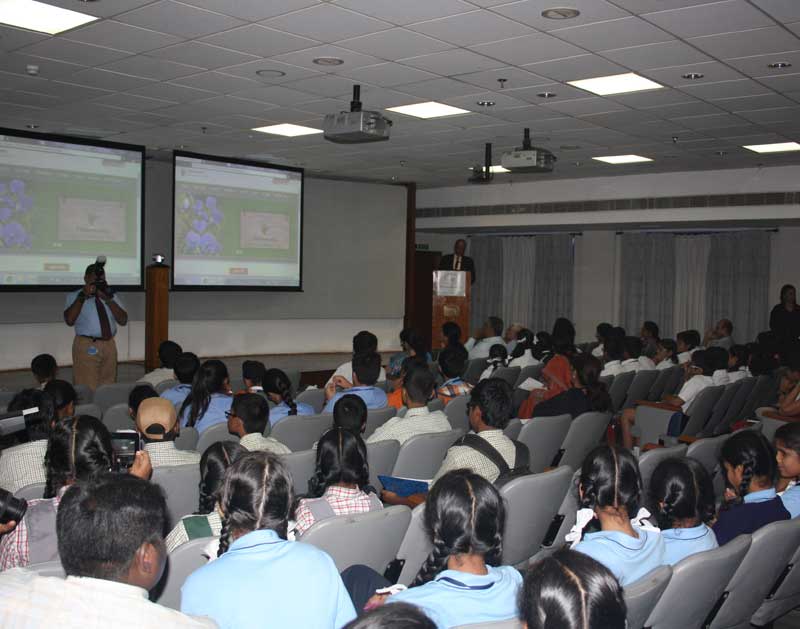 The launch event in Kolkata was held on 10th Dec. 2014 at Birla Industrial and Technological Museum , 19 Gurusaday Road, Kolkata. About 80 teachers and students from 11 schools participated in the programme There were some interested individuals and NGOs who also participated. Dr Ashok Sanyal, Director,Bio-diversity Board, was the chief guest for the day and formally inaugurated the programme. In his lecture he told about the importance of biodiversity and effect of climate change on biodiversity . It was a very interesting interactive session with the students. 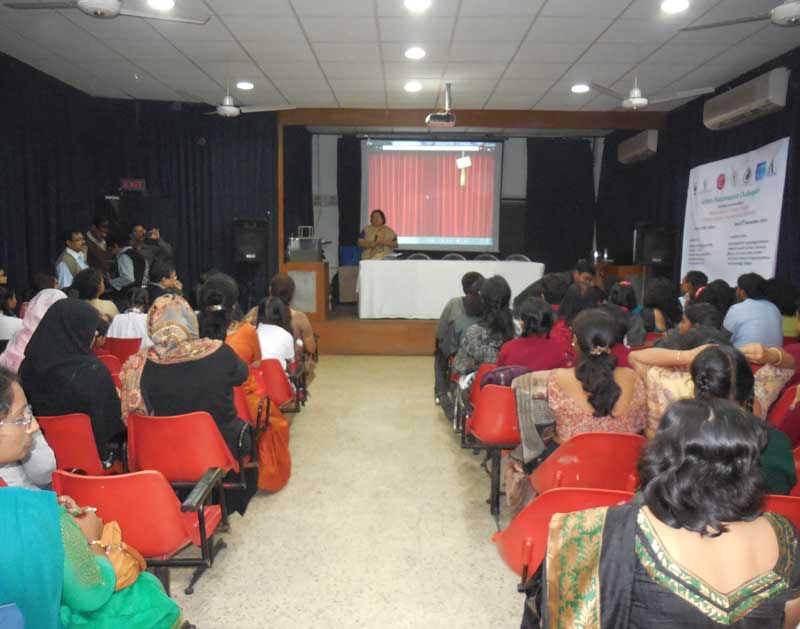 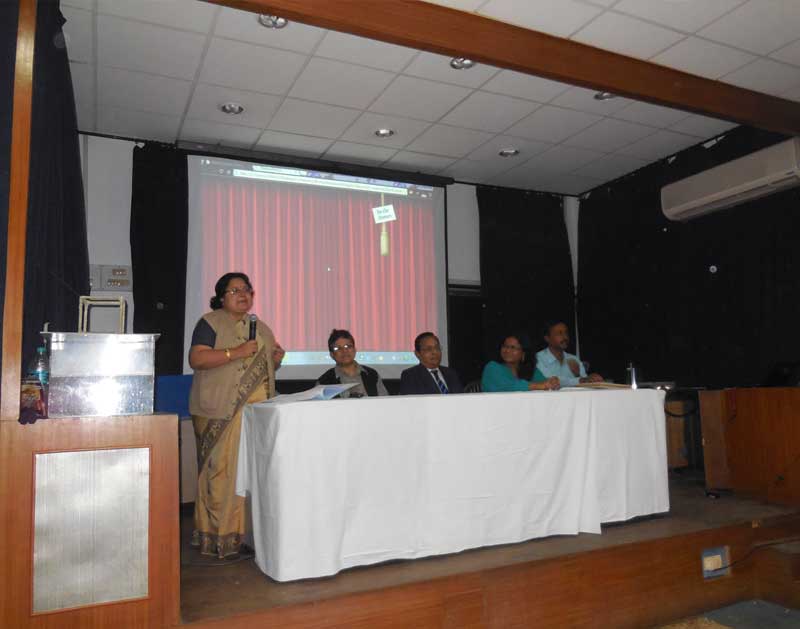 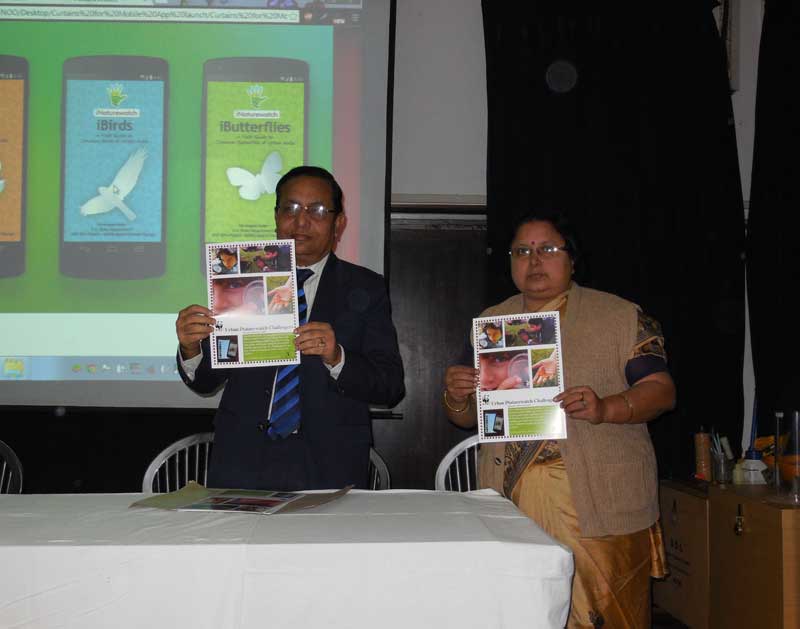 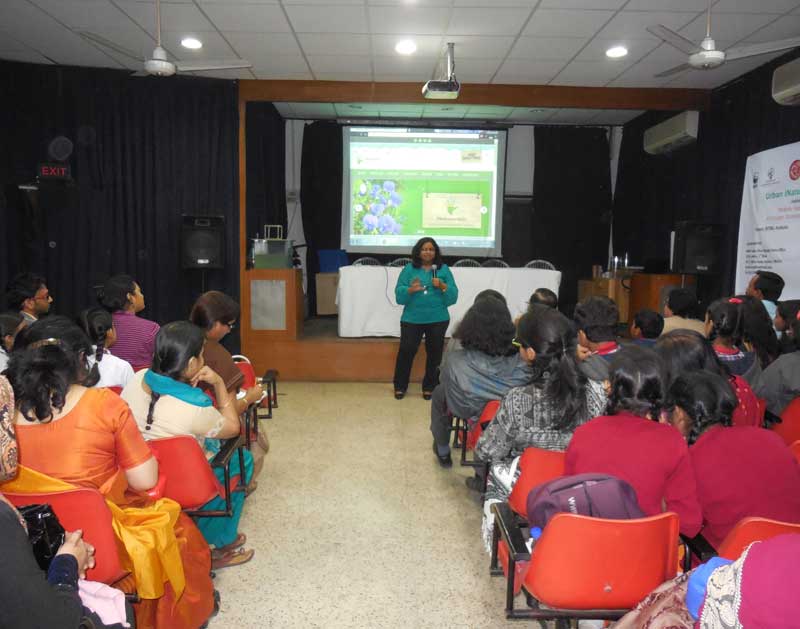 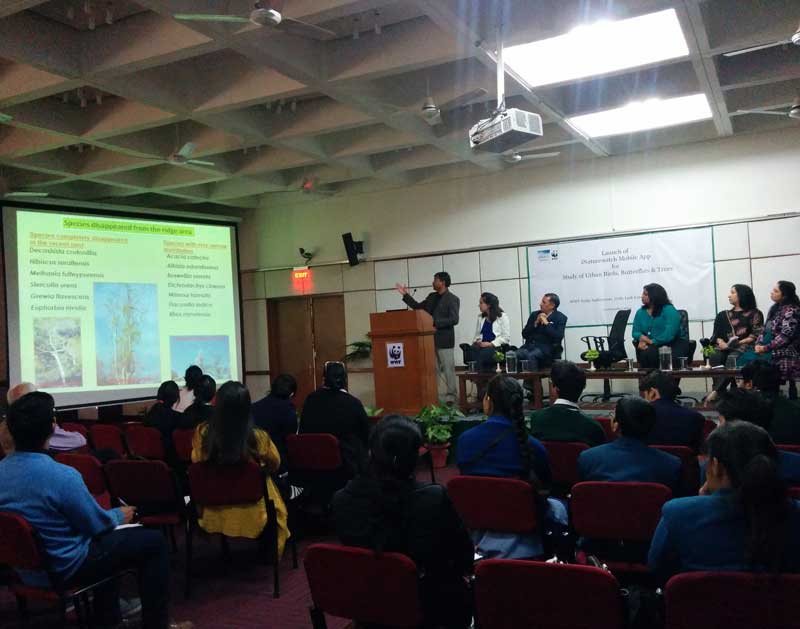 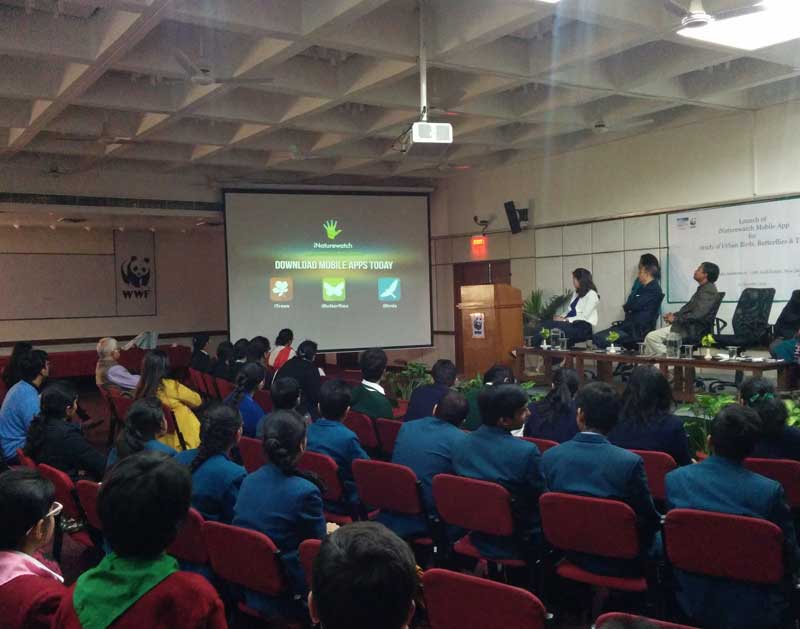 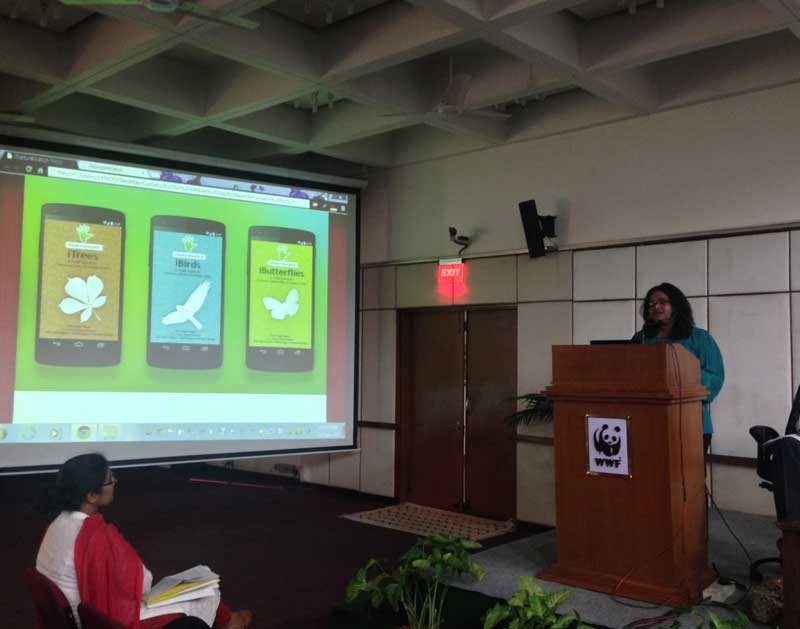 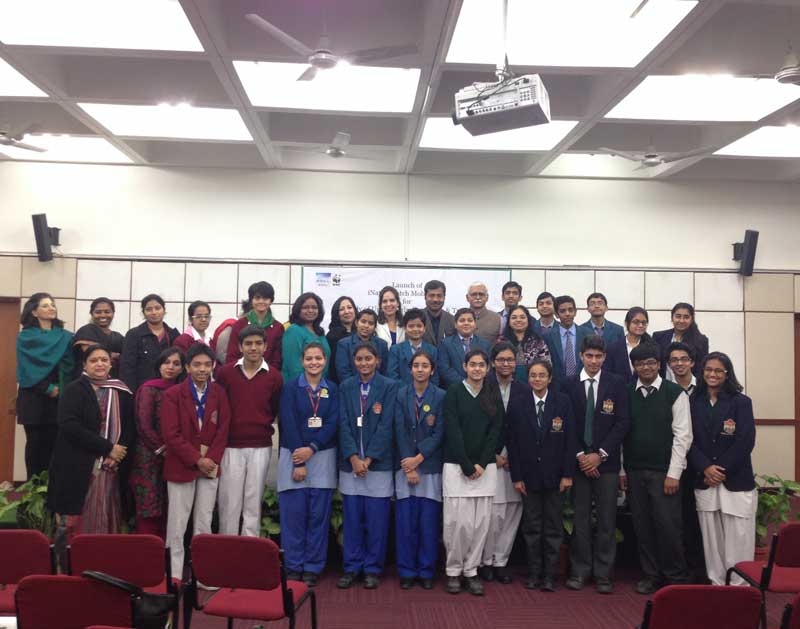 These mobile apps can be downloaded here! 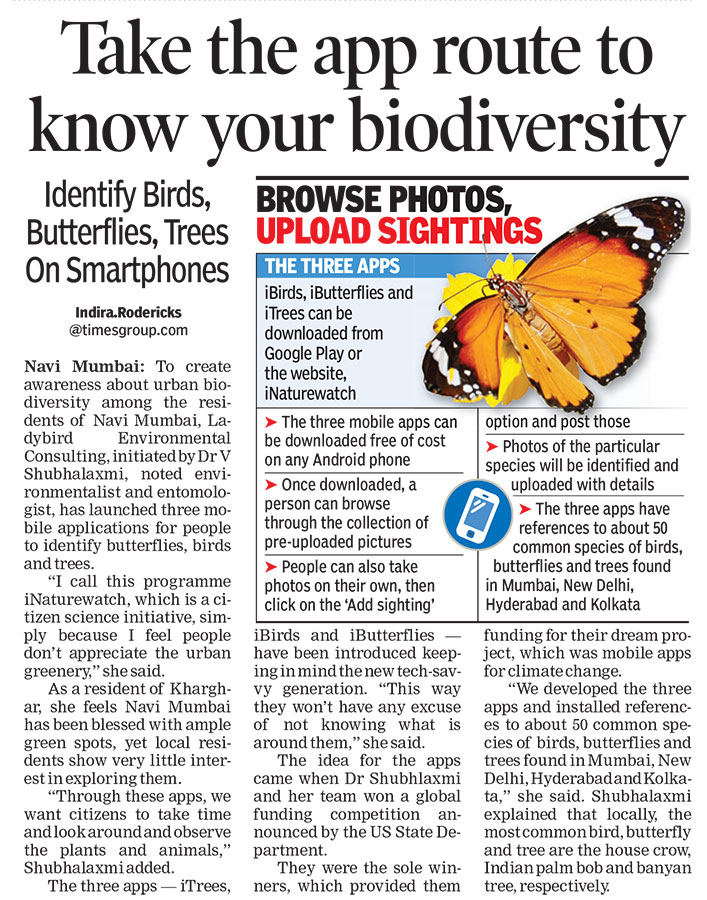 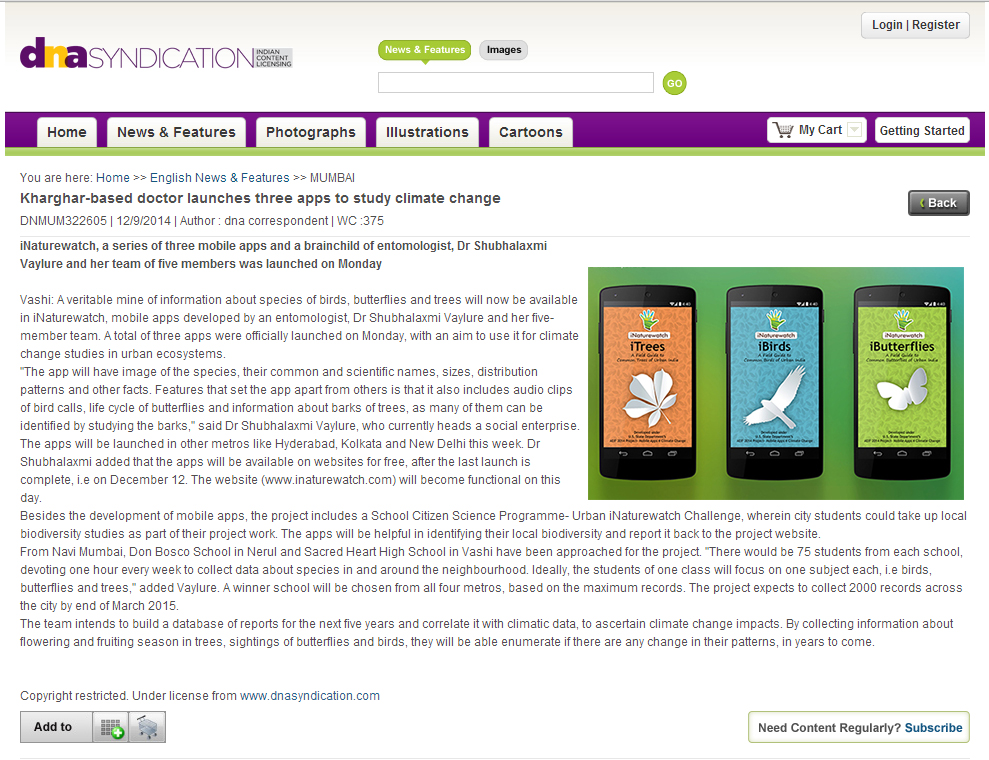 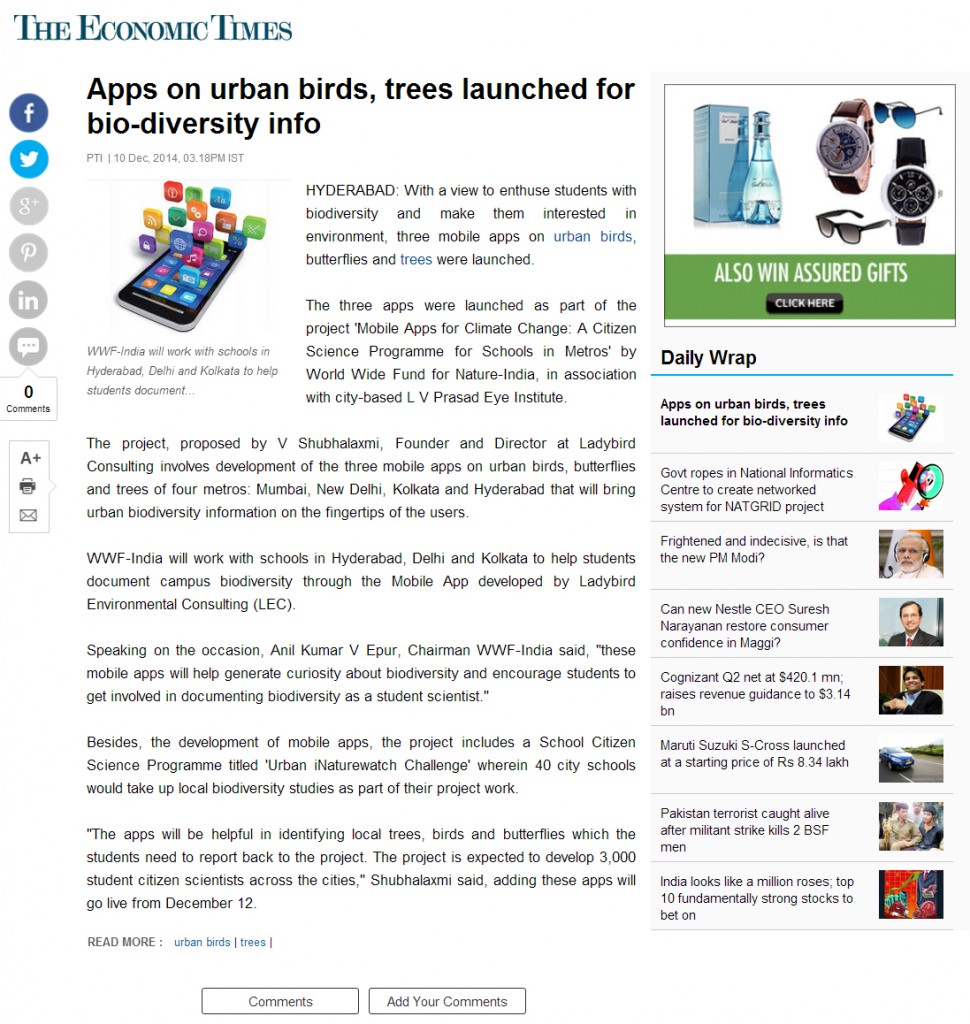 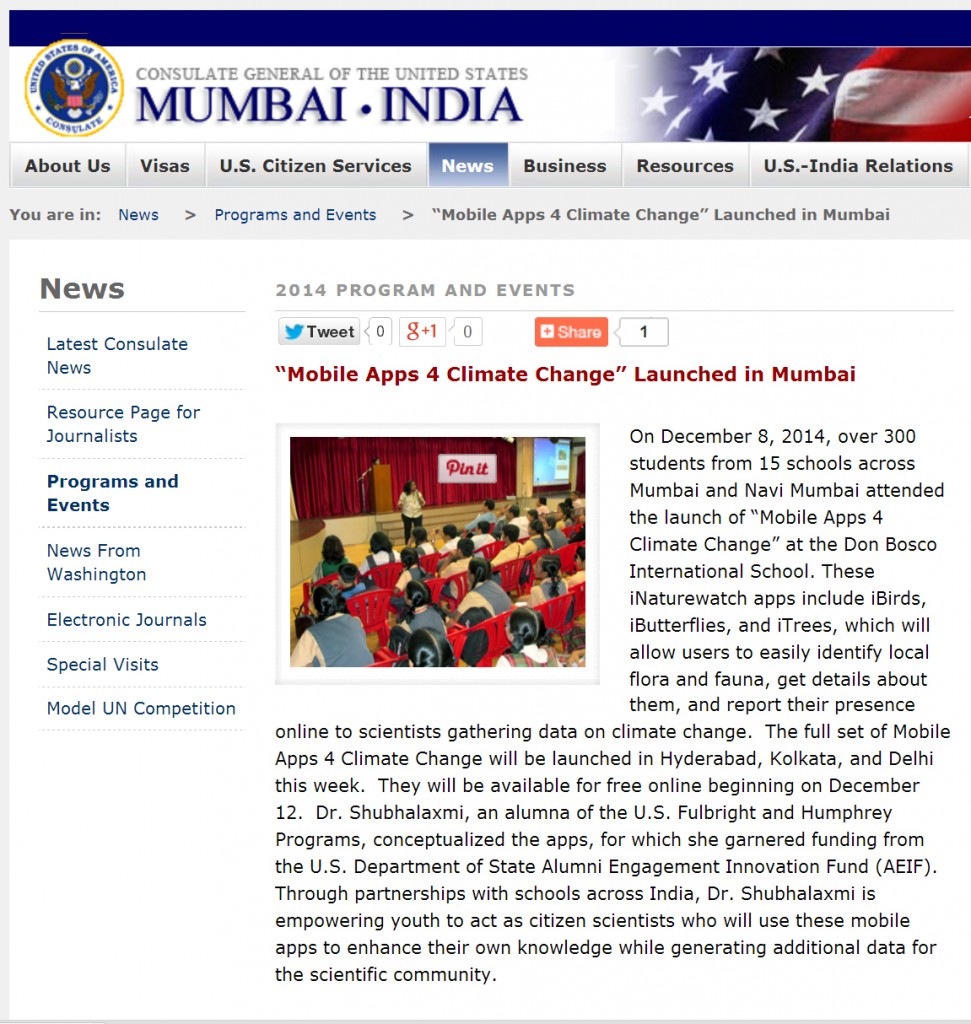 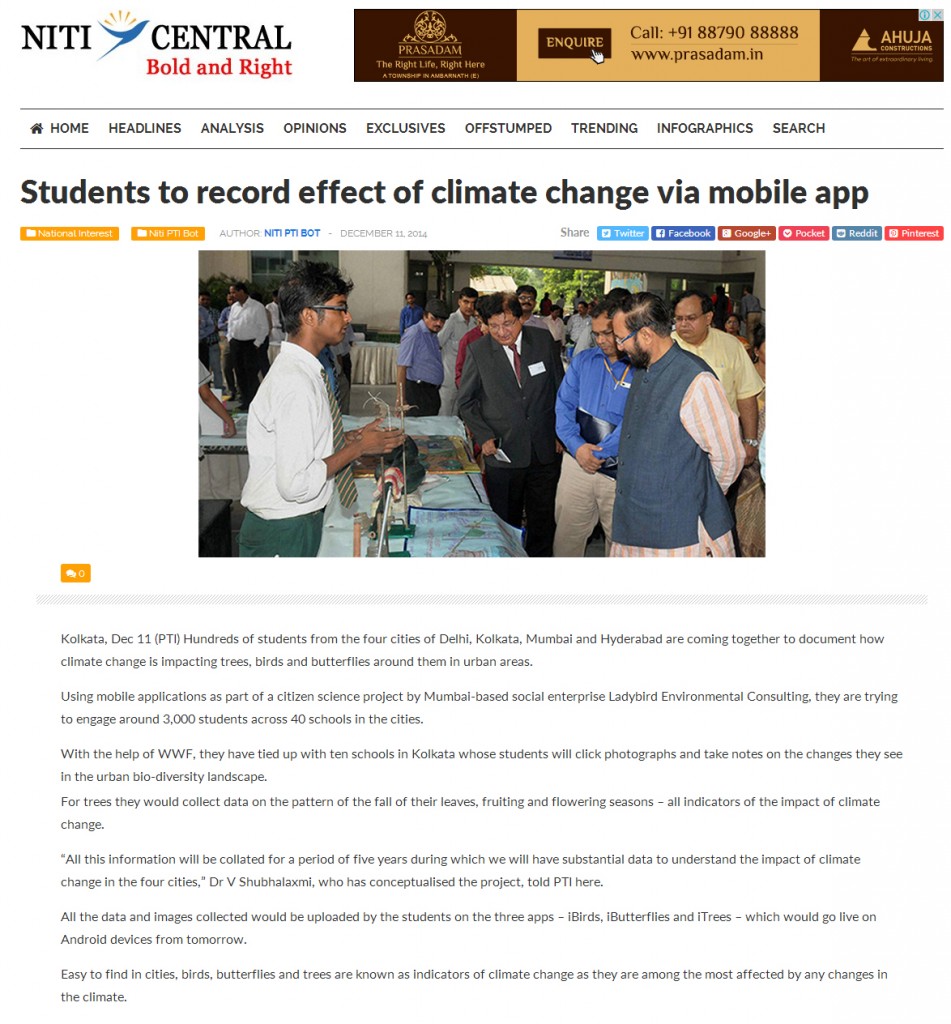 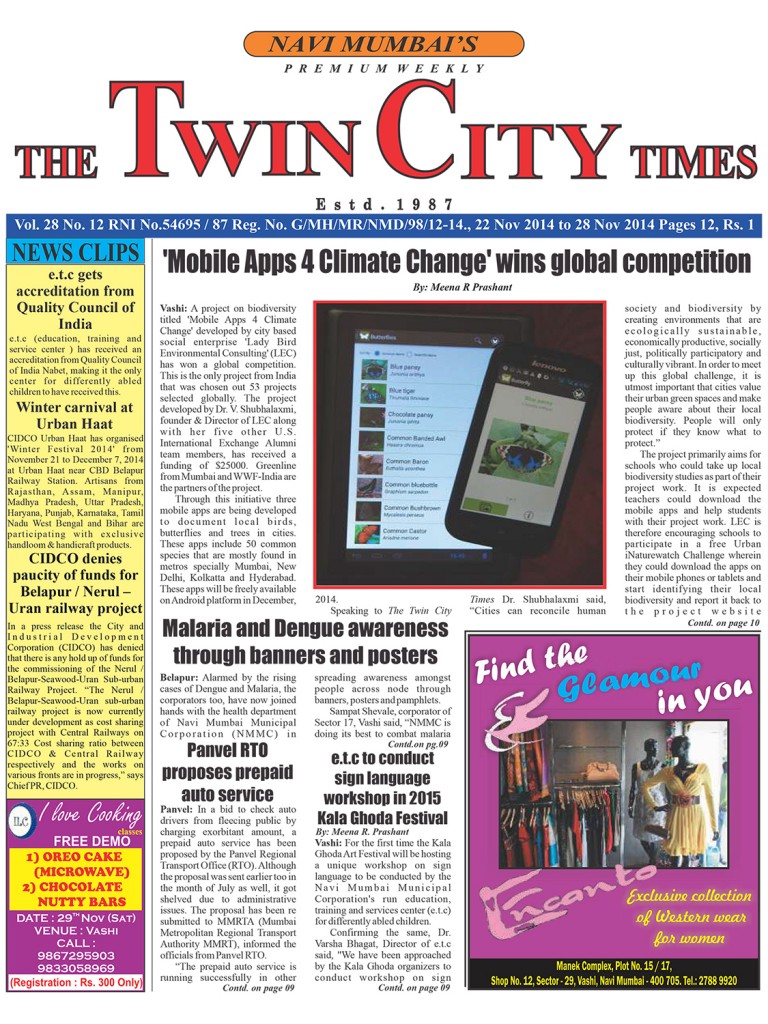 We are thankful to Dr.Shubhalaxmi Vaylure, The Ladybird Environmental Consulting LLP for giving us this opportunity to work on such an interesting project.

Also, we would like to thank the U.S. State Department’s Bureau of Educational and Cultural Affairs International Exchange Alumni for funding the project through Alumni Engagement Innovation Fund (AEIF) and the team at U.S. Consulate General, New Delhi & Mumbai for providing assistance to the project team.
Website: www.alumni.state.gov/aeif

We are immensely thankful for the support extended by Fr. Savio and his Team at Greenline, Mumbai and Farida Tampal, Dr. Mita Nangia and Dr. Saswati Sen and their teams at WWF-India (Hyderabad, New Delhi & Kolkata) for implementation of the citizen science programe among the schools.